You're all elbows and knees.
That's what your dad says as you lay, splayed out on our bed.
I think he gets the worst of it.
Your head is always burrowed into me, but dad?
He gets the knees and feet.
In the still darkness of my room,
you have shared with me your fears and thoughts.
I can't see you, but I hear your sweet voice,
it fills the darkness like a candle,
bouncing light all around me.
Talking in the dark,
you tell me that you feel safe with me.
And the truth is,
I feel safe with you too.
There's a joy in being wanted.
It feels like motherhood job security,
that you still want me around.
And in the dark,
in the stillness of your witching hour,
your dad gets the elbows and knees,
and I get your heart.
Posted by Nancy Rose at 3:40 PM No comments:

You Make Me Brave

Hi there little soldier,
walking bravely up the sidewalk,
of a school that holds no promises of an easy day.
Trouble with friends,
struggles with subtraction,
tiny setbacks your heart doesn't know how to solve for yet.

Hi there fearless leader,
holding your baby brother's hands,
giving him the kindest face to look up to.
Playing cars,
rolling him balls,
tiny moments that show the wide expanse of your heart.

Hi there curious cat,
eyebrows furrowed as you ask questions,
while an electric current of synapses spark in your brain.
You give as much as you get,
sharing all your knowledge with me,
lighting up when you teach me something new.

Hi there gentle soul,
your empathetic heart,
held firmly on your sleeve.
In a world that will tell you
to toughen up, man up, buck up,
your kind heart is an act of highest bravery.

Hi there sweetest teacher,
making me braver,
and more grounded in this world.
Let's stand together, you and me,
holding hands in wonder,
at that magic that is life.

Today I saw a video of a baby bear,
climbing up a snowy mountain, chasing after his mom.
She traversed the white terrain with ease,
her capable paws gripping tight to places that his could not reach.
Over and over, he slipped and slid,
as she stared down that mountain urging him up.
After his biggest fall, I looked away,
afraid he wouldn't make it.
But that mama bear never lost sight of him.
And up, up, up he climbed, until he reached the top.

Today I saw my own baby bear,
walking up the stairs, chasing after your brothers.
They scampered up with ease,
two at a time, laughing the whole way.
Slowly and surely, you climbed up,
as your brothers stared down urging you up.
With your eyes gazing skyward, I climbed up behind you,
poised to catch you if you fell.
This mama bear never lost sight of you.
And up, up, up you walked, until you reached the top.

And if you fall, or if you climb,
If you slip, or if you grip,
I will be there, at your back,
poised and ready
to get you up over any mountain.

"I want to write you a poem," I said.
...
"Tell me what I should write, what's your favorite thing?"
...
You gave no reply, sitting in my lap like the yolk of an egg
"Do you want a poem about superheroes or bugs?"
"How about rockets or peanut butter sandwiches?"
...
Silently watching Ben 10 fight aliens (or something like that), you said nothing.
I stroked your hair.
Your silence was my inspiration.
Here is your poem,
it's about you
and it's about me
and how at 5, you still fit in my lap.
How you make no demands of me,
how you don't need a poem,
how of all the bright and lovely things I could write of in this world,
Your sandy brown hair nestled close to my heart is all the poem we need.

Posted by Nancy Rose at 2:45 PM No comments:

The night before Jack turned 7, Trevor and I sat in a dimly lit living room, the remnants of Jack's birthday party strewn about the room- handmade cards from his friends, noisemakers, Lego boxes. The house was quiet and was very conducive to reflection.

"We have completed a cycle of 7 you know," I said to Trevor. "I'm a big believer in cycles and I have been feeling for awhile now that we're approaching an end to one."

We began to discuss the differences between the 1st cycle and the 2nd.

And it was through this discussion that a lot of things began to make sense and click for me. The 1st cycle of 7 is physically exhausting. It is the cycle in which you most likely have the most minuscule social life, your conversations are almost exclusively about your children, and as a million synapses snap into place as you learn the new motions and new steps of being a parent to newborns, babies, toddlers, and preschoolers, you barely have anything left over for your spouse, your friends, yes, sometimes your children, and most definitely yourself. So it stands to reason that you drop out of sight for a bit. You relish when plans get canceled, you reply "maybe" to every single event you're included in because your life is one big exhausting question mark. Retreating into your phone and seeing photos of your friends and feeling connected even when it's so hard to be connected was in many ways a life raft for me. I could have people see into my life and I could see into theirs and it was nice... was. nice.

Something clicks at 7. You realize you're getting better at this. Your kids are likely more self sufficient and even if you have young ones like we do, you aren't as stressed out over the little things anymore. Those million synapses have clicked in place and you deftly and coolly go through the motions with a muscle memory that is instinctual. Alas, it's not all smooth sailing though because now the mental exhaustion sets in. Having to now negotiate with your older children. Building in good habits for them, teaching them instead of doing for them. These are emotionally draining tasks. The heavy lifting is all being done internally and not externally and that is when you realize that your social circle, the one you couldn't nurture and grow in that 1st cycle of 7 is precisely what you need now.

And that, my friends, is the exact place I find myself on January 30, 2017. 23 days into my 2nd cycle of 7 and I'm realizing that it's time to reach out, which seems like a funny thing to have to do in an age of social media where the possibility of "connection" seems endless.

But it doesn't. I have realized that it's an absolutely false sense of connection that has fueled more loneliness, more disconnection among us than ever before. I would dare say that you could be happier doing almost anything than scrolling through Facebook, Instagram or Twitter. Like, seriously, almost anything. So it's time for a break. I'll be honest, I'm not deleting Facebook. It is an incredible time capsule of my life for the past 10 years. It's a treasure trove of photos and messages that makes it hard to get rid of. But in order to limit the amount of time it consumes in my day and to limit the amount of time it robs from my children and husband it's time to reconfigure it.

My Facebook circle needs to be pared down, a ton. It's not because I don't like the people I've connected with here, it's not because I don't care about them, but it's because in this 2nd cycle of 7, real human connection is what's going to get me through, not pretending I'm connected because I "like" your meme. A friend recently commented that she misses me before adding that it's totally unnecessary since we live in the same town. That got me thinking.

So, this is kind of a Dear John letter to both Facebook and the 1st cycle of 7 where Facebook helped bolster me. It now feels like a weight, something to be managed or tended to, and as I've realized, the real things in my life I need to tend to are outside of the internet.

It's a first step toward being intentional about the 2nd cycle. It's time to re-organize my time.

xo
Posted by Nancy Rose at 9:50 AM No comments:

In ancient Roman religion and mythology, Janus is the god of beginnings and transitions, gates, doors, doorways, endings, and time. He is usually a two-faced god since he looks to the future and the past. The Romans dedicated the month of January to Janus and I dedicate this poem to my own January baby, Jack.

The god Janus sits in solitude.
One eye gazing forward
One eye fixed on the past.
I too stand in a doorway of the heart,
clinging to your childlike wonder
while marveling at the fact that we just spoke about dinosaurs
and you taught me something new.
I adore your sweetness and untarnished heart.
I delight in your maturity, curiosity...and dinosaur facts.
Like Janus, I mark this month with a reflection on duality.
My heart still sees your new baby skin and
still feels your fingers exploring my face.
My eyes see your confident stance and
the way you nimbly navigate this world.
My heart has kept you small.
My eyes have watched you grow.
And like your birthday god, I sit in wonder
at how everything we've been
has made everything we are.
One cycle of 7 complete.
You are my past
You are my present
You are my infinite future. 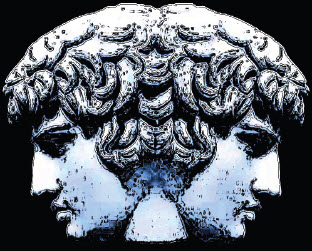 Happy birthday Jack xo
Posted by Nancy Rose at 11:18 AM No comments:

For 9 months I carried you, with the knowledge that you were my my last.
A comforting thought during the hard times.
The end of morning sickness,
the end of labor,
the final contraction,
the final push.

10/15/17
I watched you gaze out the window with a sense of familiarity.
I've seen this day before, you thought.
My feet have been planted on 365 days of earth.
I've gone around the sun and came back to where I started.
In my cozy home with these wild brothers,
With this cuddly mommy, with this sturdy dad. 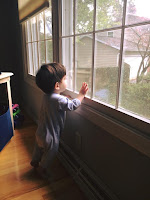 Later, when smoke circles billowed above that 1 candle,
the candle that burrowed into two other first cakes,
our wishes for you sailed up into the heavens,
disappearing almost imperceptibly
just like the baby I met one year ago.
And with one last first wish, we send you back around the sun again. 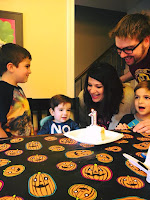 Happy birthday Teddy. We wish you 1,000 new firsts and breathless, joyful discoveries.
Posted by Nancy Rose at 10:18 AM No comments:

Dear World,
This is our family time capsule where I document all of the things I've learned as we go from party of 2 to party of 5 (high chair needed please). 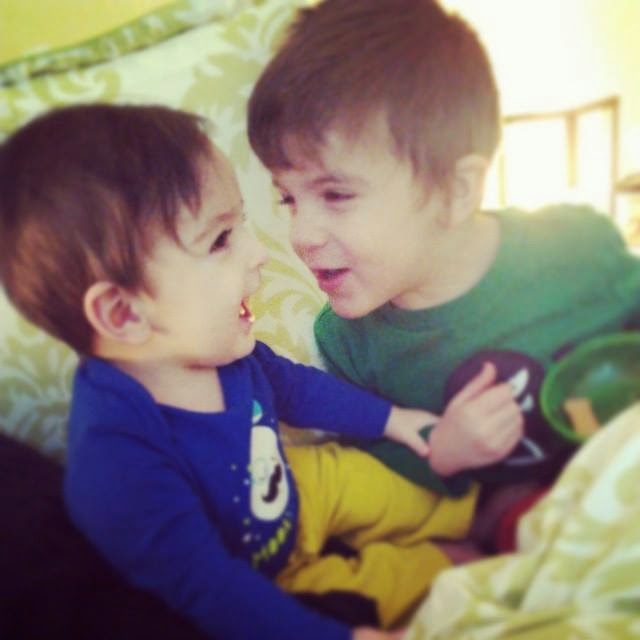 I could not tell fact from fiction Or if my dream was true The only sure prediction In this whole world was you...

Nancy Rose
I was born in the cozy middle of the afternoon, 2:29pm to be exact. In astrological terms, I was born on "The Day of the Great Leap", March 12th to be exact. I love naps, good books (especially anything related to Tudor England), my husband, my sweet little baby boy, my 5 brilliant siblings, my friends, writing, laughing, unexpected ladybug sightings, and frozen coffee drinks. For tales of my adventures as a new mom, check out http://lovethislittlefamily.blogspot.com/. For my thoughts on growing up and moving on, check out http://ofthefloatingworld.blogspot.com/